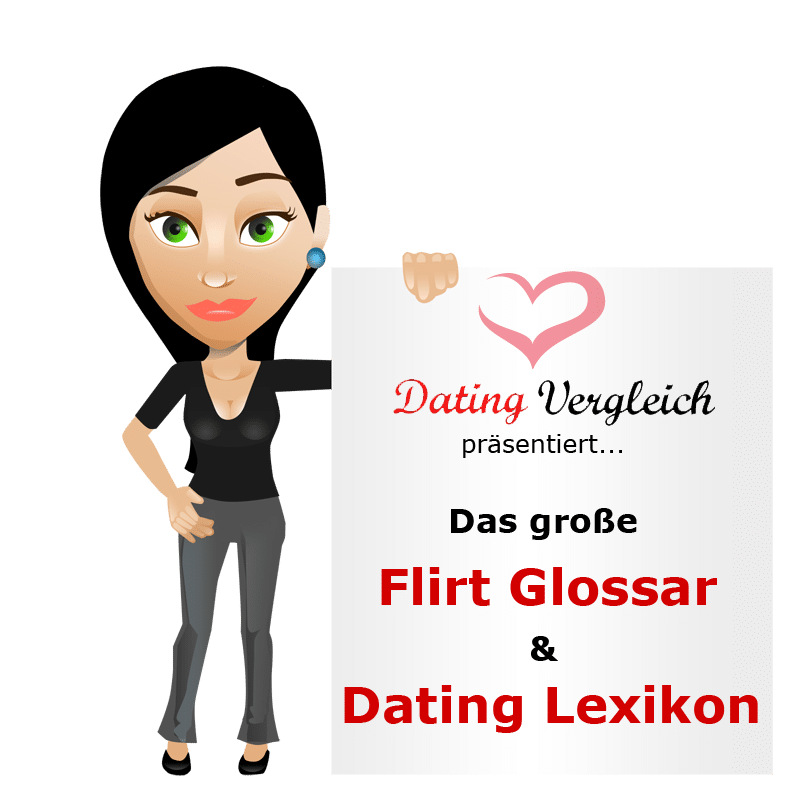 In the jungle of terms of dating and flirting portals, it is sometimes not easy to keep track. This flirting and dating glossary and encyclopedia is designed to help you look up the correct meaning of the terms and buzzwords used in a simple way.

The outcome of a passionate and usually physical adventure is often uncertain and can (therefore?) exert a strong fascination.
read more about “Adventure

Cupid in Roman mythology refers to the son of Venus and Mars and is the god of love.
read more about “Cupid

The term androgynous comes from the Greek and means “combining female and male characteristics and traits. At first glance, androgynous people cannot be clearly assigned to a particular gender.
read more about “Androgynous

In the context of love and relationships, the term affair refers to a sexual love adventure that often takes place simultaneously with an existing partnership.
read more about “Affair

The term aphrodisiac comes from the Greek and is derived from the goddess of love “Aphrodite”. It refers to a means of increasing or stimulating sexual desire (libido). Using an aphrodisiac stimulates sexual desire.
read more about “Aphrodisiac

A Tergo is a term for different variations of sexual intercourse and means “from behind”. The active partner has the back of the passive partner in view during the sexual act – thus penetrates from behind.
read more about “A Tergo

On various singles exchanges and voting portals, there is the option to rate the attractiveness of a photo by using a scale.
read more about “Attractiveness Barometer

An artificial person, or a graphic representative (e.g. in a computer game, in a virtual world or also in an online community or singles exchange) of a real person, is called an avatar.
read more about “Avatar

An escort service or escort agency is a service provider that arranges women or men (so-called escorts) for a fee.
read more about “Escort Service

Benching is anything but nice! After all, anyone who is banned sits on the proverbial bench. At the same time, this relatively nasty and unpleasant trick is used mainly in the initial phase of an acquaintance.
read more about “Benching

A blind date is a date between two people who have not met before and know nothing or very little about each other.
read more about “Blind Date

In the foreground of flower sex (also called cuddle sex) is romance and a gentle approach.
read more about “flower sex

The term comes from English and translates roughly as “bondage” or “bondage”.
read more about “Bondage

A “bromance” is the term used to describe a NOT gay close male friendship. This beautiful artificial word is a neologism of brother and romance.
read more about “Bromance

The term chat comes from the English (to chat) and literally means “to chat, to converse”. In the Internet age, the term chat or online chat refers to real-time electronic communication, usually over the Internet.
read more about “Chat

The term coming out refers to the process of finding one’s identity as a gay man, or as a lesbian woman. The person becomes aware of and accepts his or her own same-sex feelings or feelings that deviate from the gender role.
read more about “Coming Out

The trend from the USA, in which mature women date younger men and which is now also spilling over to Europe via Australia, is called cougar dating.
read more about “Cougar Dating

A date is commonly referred to as a date or a meeting to get to know each other. For lovers, this is also called a tryst.
read more about “Date

The term describes women who offer sadistic and dominant practices for payment.
read more about “Domina

From a purely technical point of view, marriage is a socially recognized partnership between two people who are defined by generally applicable, usually legal, rules and who are referred to as spouses, husband and wife, or even husband and wife.
read more about “Marriage

Eros is called the Greek god of love. This decides which people come together.
read more about “Eros

Escort is a temporary companionship, usually for a man by a socialite.
read more about “Escort

A faux pas is an unintentional violation, a tactlessness, of social manners. This violation is usually due to thoughtlessness, ignorance or carelessness.
read more about “Faux pas

Femidom – the condom for women. A femidom is a contraceptive offered since 1990 that prevents sperm from reaching the uterus. It also provides protection against sexually transmitted diseases.
read more about “Femidom

Long-distance relationships are becoming more and more common. Nowadays, almost every eighth couple lives this form of partnership.
Most often, the profession leads to separation for a time.
read more about “Long Distance Relationship

The origin of the term is rooted in Portuguese. Portuguese sailors brought back carved animal and human figures from their voyages in West Africa. These were said to have a magical effect.
read more about “Fetish

The term naturism (free body culture) refers to communal nudity without seeing this as an expression of sexuality. Commonality here is the joy of experiencing nature and also being naked
read more about “Nudism (Free Body Culture)”

In photo voting, pictures are rated in a wide variety of categories. This particular form of attractiveness barometer is a relatively new invention in the field of online dating.
read more about “Photo voting

Friends with Benefits / Friendship Plus

Ghosting” is a relatively recent phenomenon. It is a recently emerged trendy term and is generally understood to mean that someone simply disappears from life, becoming a ghost, so to speak.
read more about “Ghosting

A hobby whore is usually in an inconspicuous “normal” everyday life, which she temporarily leaves. In varying degrees and intensity, she offers sexual services in exchange for pocket money or other material benefits.
read more about “Hobby Whore

Hyping refers to a dating trend that is anything but nice. After all, anyone who abhypes a person, as it is called in new German, usually has something else in mind than it appears at first glance.
read more about “Hyping

Pet names are love and tenderness poured into one word. They have a long tradition, they have always existed between people. They are something very personal and unique between two people.
read more about “pet name

Matching is about suggesting the right candidate to the members of an online dating agency.
read more about “Matching

The relatively young relationship phenomenon of “MINGLE” is a word creation from the English terms “mixed” and “single” and means as much as that one is actually “officially” single, but somehow also in a relationship at the same time.
read more about “Mingle

You are often asked to provide a nickname when registering on platforms. This is a name you give yourself on the Internet to avoid revealing your real name right away.
read more about “Nickname

A one night stand is a short relationship of a sexual nature, which usually takes place for one night or just a few hours.
read more about “One Night Stand

Philia comes from the Greek and describes a form of love that emphasizes friendship as a form of relationship.
read more about “Philia

So here it’s about dating the supposedly ugliest person and then dumping them in a lousy way.
read more about “Pigging

Positive thinking is helpful in many situations in life: You are more satisfied with your life, have an easier time in your job and are more likely to find a partner. Nevertheless, many people have the problem of struggling with fears, doubts and worries.
read more about “Positive thinking

The term romance scam refers to a form of Internet fraud in which fake profiles on singles exchanges are used to make victims believe they are in love with the aim of obtaining a financial benefit.
read more about “Romance Scamming

The term safer dating means the possibility of dating safely via an appropriate dating portal.
read more about “Safer Dating

Slut shaming is attacking women for their sexual behavior, conduct, or manner of dress, or shaming them for it. Slutshaming is an instrument and part of the so-called Rape Culture.
read more about “Slut Shaming

Speed dating is a trend from the USA that is also becoming increasingly popular in our country. It’s a quick way to get to know someone, whether it’s a potential partner or even just a flirt or friendship.
read more about “Speed Dating

Stashing is more than just a dating trick. Because in this case, you are already far beyond simple dating. Stashing is more likely to occur in the phase when you are just newly in love and you just want to be happy together.
read more about “Stashing

Submarining is also a dating tactic that can cost you your last nerve. Because with this behavior, the dating partner does not get in touch for months and sends a message all of a sudden and abruptly.
read more about “Submarining

A Sugarbabe is a young woman, usually between the ages of 18 to 25, who enters into a relationship with a significantly older man.
read more about “Sugarbabe

A sugardaddy is a usually older man who has a mutual relationship with a much younger woman.
read more about “Sugardaddy

The word originally comes from the South Seas, where it denoted things that must be strictly avoided because they possess dangerous powers or things that are forbidden.
read more about “Taboo

Phone sex is about satisfying sexual desires by talking on the phone. Through the intimate and pleasurable conversation on the phone, participants become sexually aroused and often satisfy themselves.
read more about “Phone Sex

The term “Toy Boy” refers to a very youthful lover of a much older woman.
read more about “Toy Boy

This term comes from the Anglo-Saxon language area and translated into German means as much as “trophy female”, “prey female” or also “trophy female”.
read more about “Trophy Wife

In a narrower sense, the term voyeurism refers to a form of sexuality in which a person becomes sexually aroused by secretly looking at undressing or naked people, or by watching sexual acts.
read more about “Voyeurism

A webcam – or simply cam for short – is a small digital video camera that connects to a computer to send the footage it takes to the web. The recorded video images of a person can thus be transmitted in real time via the Internet and used, for example, for a video chat or video telephony.
read more about “Webcam